Currently, most of us #stayathome. We would like to make sure that you do not get bored – so we looked through our OCEAN archives and found films and additional material from the last Int. OCEAN FILM TOUR Volumes for you to pass the time at home.

Ramón Carlín had made a fortune as salesman, Laura Dekker was schoolgirl from Holland. Definitely no one expected them to sail around the word - and yet they did it. Let‘s revisit two of our best ever sailing film from the Int. OCEAN FILM TOUR: „The Weekend Sailor“ and „Maidentrip“. 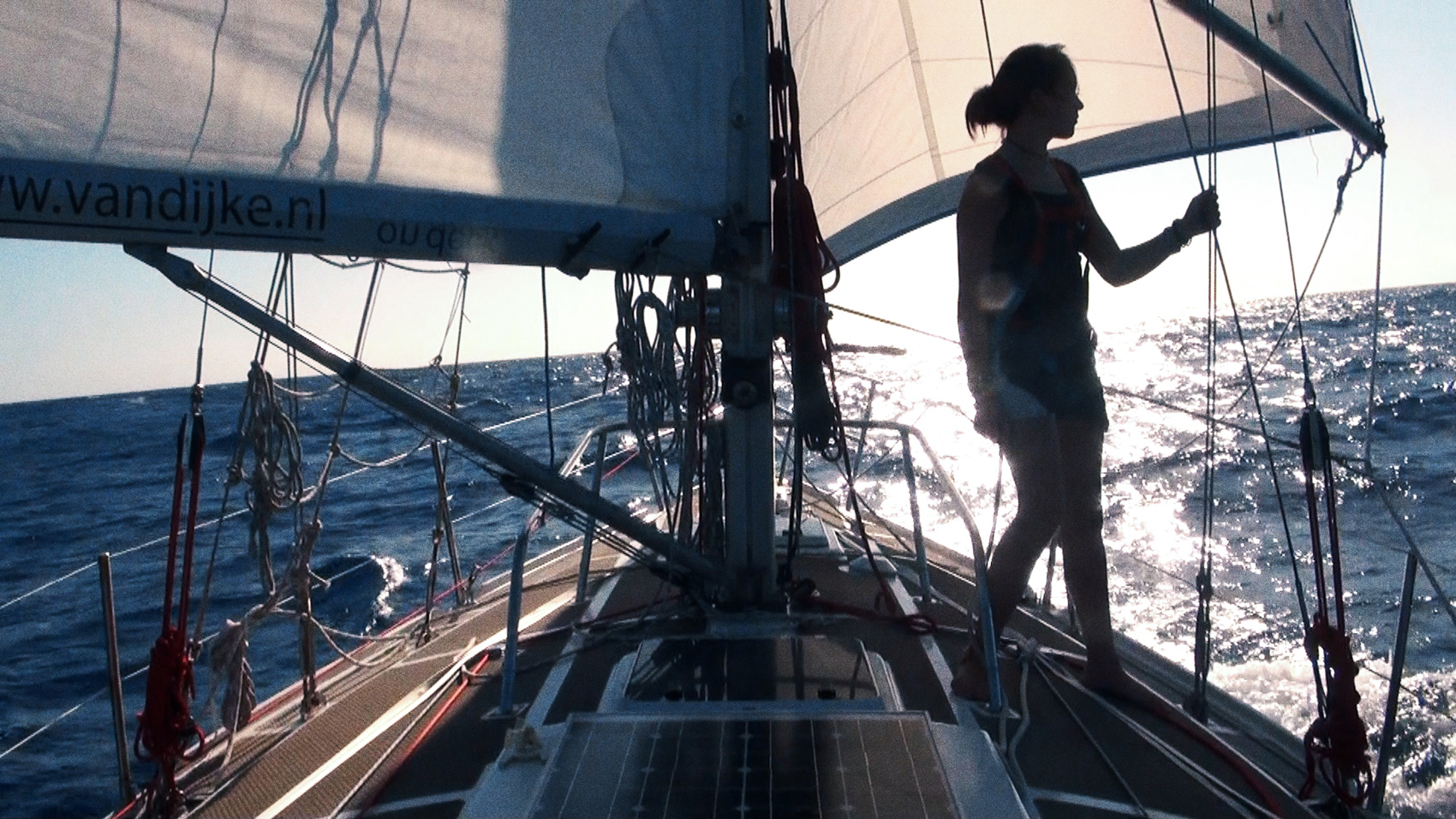 Born on a boat and raised in shipyards, Laura Dekker grew up with one dream: to sail around the world alone. At thirteen, her daring plot sparked resistance from Dutch authorities and a global storm of media scrutiny. A year later, she won the right to set sail. Now, far from land, family, and unwanted attention, Laura spends her pivotal teenage years exploring the world alone in search of freedom, adventure, and lost childhood dreams. Jillian Schlesinger's debut feature amplifies Laura's brave, defiant voice through a mix of Laura's own video and voice recordings at sea and intimate vérité footage from locations including the Galapagos Islands, French Polynesia, Australia, and South Africa.

You can watch "Maidentrip" on Amazon Prime Video.
WATCH MOVIE

It is not unusual for teenagers to test their limits. However, most fourteen-year-olds restrict themselves to fighting with their friends or parents. Laura Dekker managed to start a fight with the Dutch youth welfare service and to attract the attention of the whole country. Her dream of circumnavigating the world alone was extraordinary enough to become a hot topic in the Netherlands. There was hardly anybody who did not want to contribute his opinion on the core question of the problem: Is she allowed to do that? 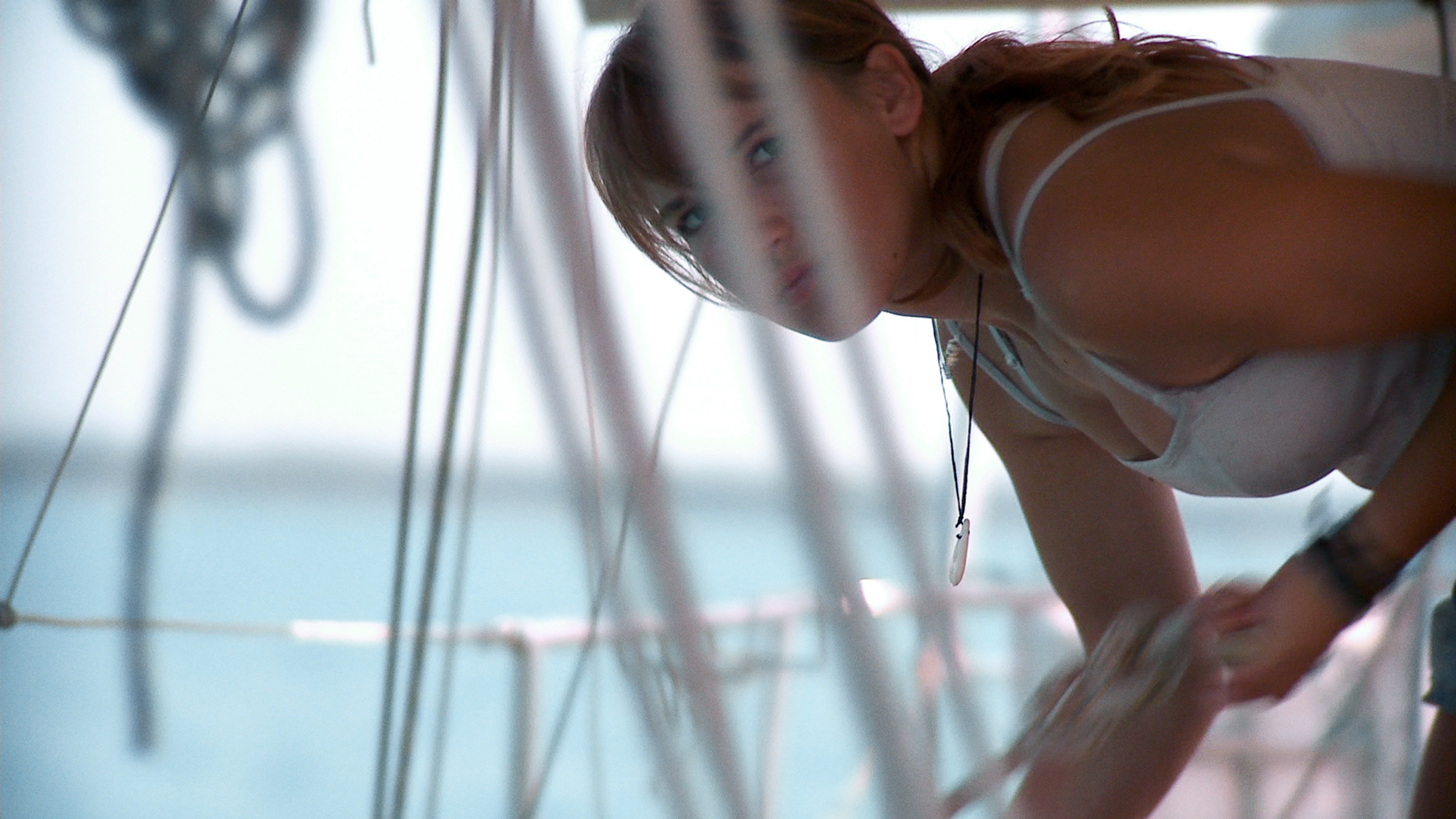 By now, Laura has been an adult for quite a few years. But what does coming of age mean to a person who has defied all limits when she was only fourteen? Laura Dekker has managed to circumnavi­gate the world as the youngest solo sailor ever. Guinness World Records does not accept this record to prevent even younger girls from setting sail to beat her impressive feat. But even if someone managed to do this— Laura wouldn’t care if there was a new record. She does not set much store by her own success and still doesn’t think completing her school education or leading a ”well­ ordered” life is important. She still lives on a boat, together with her boyfriend and their baby.

She was born in New Zealand. At the time, her parents were also sailing around the world. Little Laura took her first steps on the swaying deck of the boat and until her sixth birthday regarded the boat as her home, either on the sea or at anchor in Den Osse. When she started going to school, the family stayed on land permanently for the first time. This was a decisive turning point in Laura’s life. When her parents separated, she decided to stay with her father, who is also the one who passed the passion for sailing on to her. To him, it was beyond all question whether she should be allowed to head into the greatest adventure of her young life with her boat. But there were quite a lot of people who were of a different opinion. What was hotly discussed in public was no big deal in Laura’s personal environment. She was able to sail. She wanted to sail. She still wants it this way today. 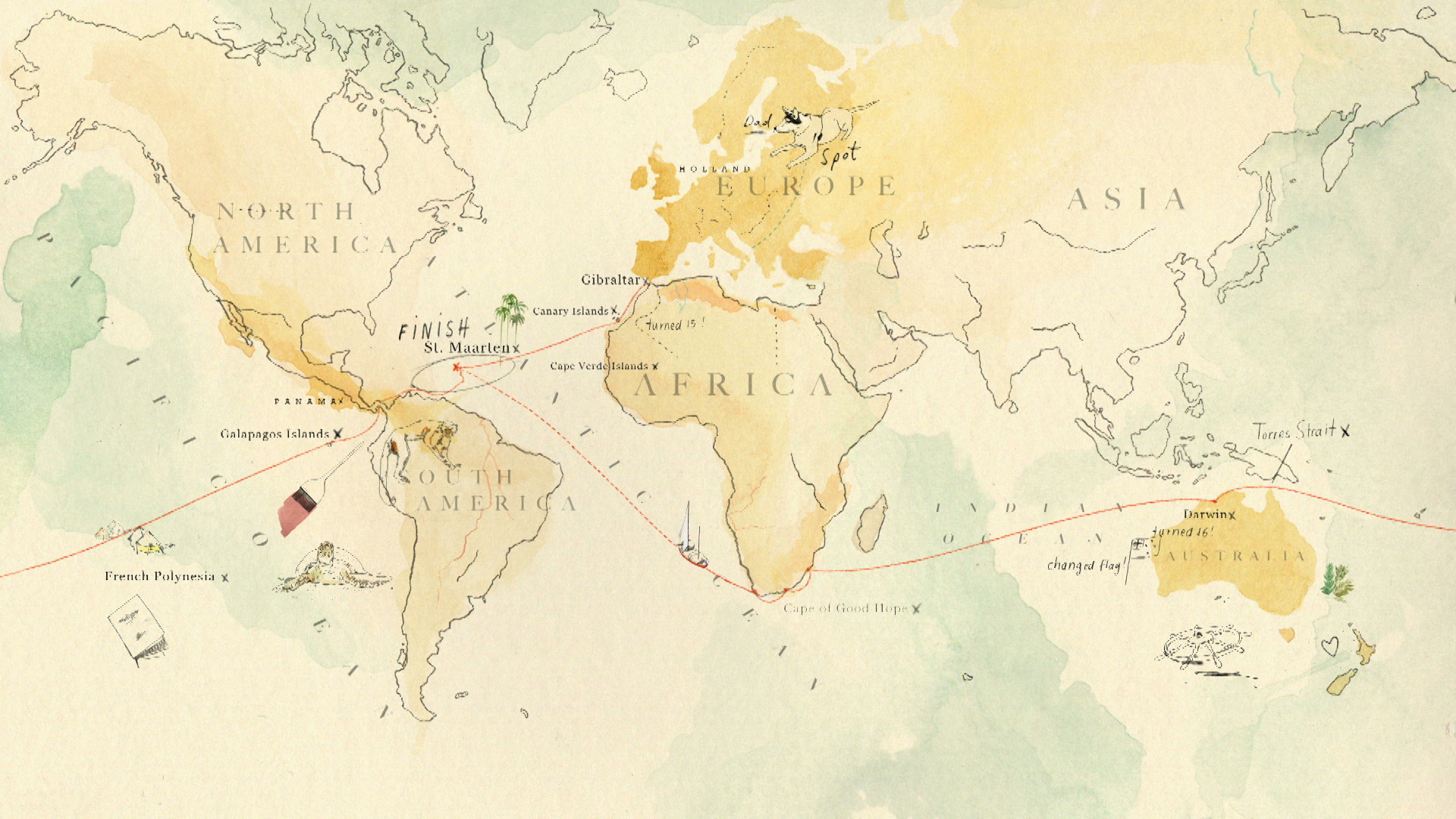 She was embarrassed by the attention she attracted be­fore and during her journey. She also finds the success of the documentary ”Maidentrip”, for which she filmed most of the footage herself, a bit weird. She filmed during the day and at night, in calm and rough seas and only switched off the camera when the filming became a danger to the adventure itself, for example when she had to navigate through Torres Strait in the pitch dark. The film shows that most of the time she enjoyed sharing her experiences with other people, but all the same Laura Dekker says that she is not 100 percent happy with the film—she keeps the reasons to herself, though. It cannot really be because she wants to keep her story to herself. She gives presentations and has written a book about her journey: ”One Girl One Dream".

Modern adventurers walk a fine line between realising their own dreams and fulfilling their obligations towards their sponsors, whose financial support they depend on. But what is actually important when travelling? Is it more im­portant to be on the go and to enjoy the moment? Or is what counts in the end only the story you can tell afterwards?

For Laura it’s still only one thing that counts: sailing. Whether she has already overcome the greatest challenge of her life still remains to be seen, though. Somebody who has travelled around the world can still have great plans, for example the circumnavigation of Cape Horn. Currently, Laura is working on a new project: Through the Laura Dekker World Sailing Foundation she is raising money to build a boat and take teens on a sailing trip to teach them important life lessons – far away from schoolwork and a normal everyday life. 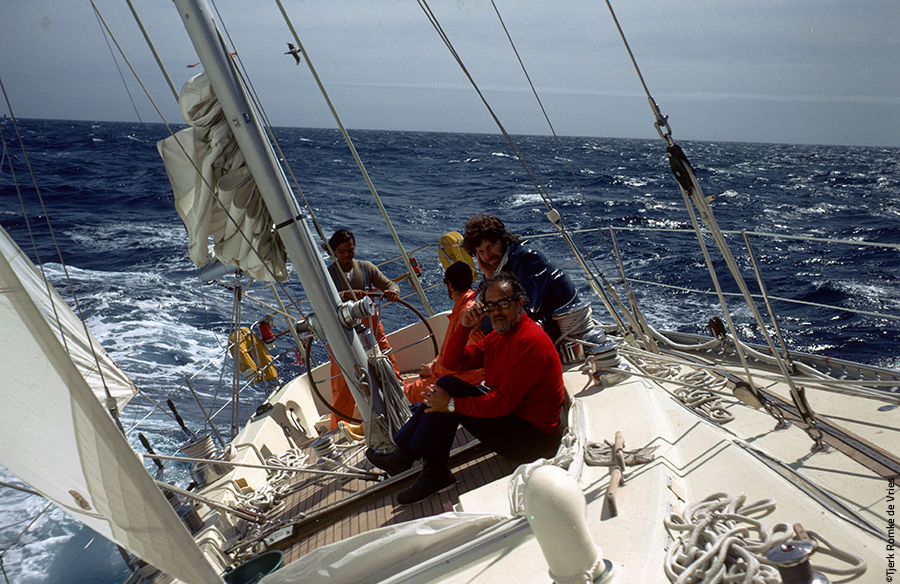 Seventeen yachts, seven nations, 27,000 miles at sea: 1973 marks the year a sailing trip around the world turned into a race. But when the first Whitbread Round The World Yacht Race sets off from Portsmouth, England, it’s not only the Empire’s most renowned sailing teams on the start line. There’s a dark horse in the competition: Ramon Carlín, aptly named the Weekend Sailor, decides to take part and he’s got company: With a motley crew of friends and family and next to no sailing experience, the 50-year-old Mexican embarks on a voyage to remember. Shunned by the press at first, Carlín turns into the unlikely hot contender of the race. THE WEEKEND SAILOR tells the legendary story of a man the sailing world wasn’t ready for.

You can watch "The Weekend Sailor" on Vimeo on Demand.
WATCH MOVIE

Ironically, Ramon Carlín owes his victory against world’s best sailing teams and becoming the first winner of the Whitbread Round the World Race to his daughter-in-law. In an effort to keep his son Enrique from marrying his teenage sweetheart, the Mexican salesman enrolled his son and himself for the first Whitbread Round the World Race in 1973. At the time of his enrollment, Carlín had neither a boat nor a crew. But as he went on to prove to the world, Ramon Carlín is a man of few words but of great actions. The few words he does make, he keeps.

1973: The announcement for the first crew sailing race around the globe puts the international sailing scene into a frenzy. In a costly selection process, the British Navy selected the best 40 of 800 sailors to make up the United Kingdom's finest sailing crew. The sailing novice Carlín was far less conventional in his approach. In addition to his wife Paquita, his son, his trusted em- ployee Cantis, and two of his nephews, Carlín assembles a motley crew of international sailors—Tjerk Romke de Vries of the Netherlands; the Americans Keith Lorence, Bob Martin, and Ray Conrady; the Australian David Bowen; and the Brit Butch Dalrymple-Smith—to bring the necessary manpower and know-how on board. 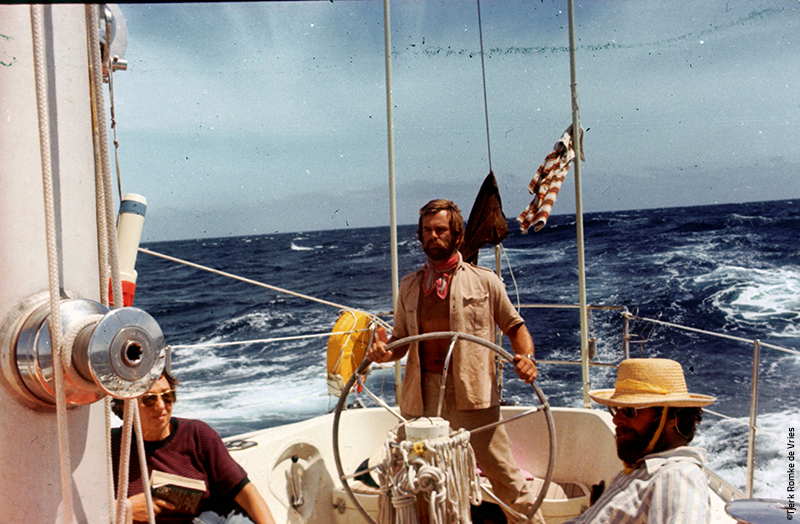 Each man Carlín puts on the crew is a specialist in his field, and Carlín’s focus on quality and expertise shows in his choice of the vessel as well. He buys his ship, the Sayula II, in a Finnish shipyard—a 65-foot ketch with five sails and a comfortable interior to keep the crew happy even after a hundred days at sea. Naming the ship after his wife’s birthplace, Sayula, Carlín proves his confidence and his commitment to be the first Mexican to participate in an international sailing race. The ambitious captain, his capable crew, and the brand new ship are the best recipe for surprising their opponents.

As the 17 participating yachts gather in Portsmouth on September 8th, 1973, the Mexican family man without sailing experience is the laughing stock of the seasoned sailors on the other teams. But when the starter’s gun goes off, all teams are made equal by what’s in front of them—27,000 sea miles, split up in four legs: Portsmouth – Cape Town, Cape Town – Sydney, Sydney – Rio de Janeiro, Rio de Janeiro – Portsmouth. 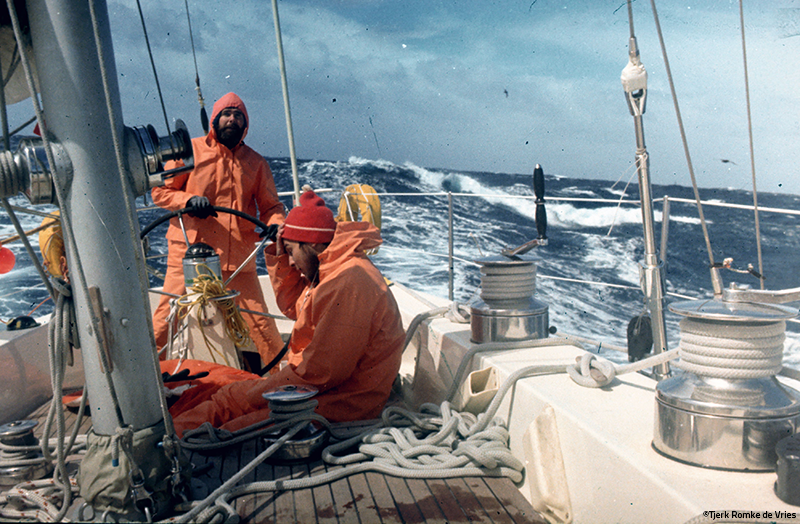 By now the regatta is called Volvo Ocean Race and has become the most prestigious and popular event in the international sailing community. After the starting shot in 1973/74 the race was held every four years but since 2006 the best sailors of the world can challenge the forces of the sea every three years. With every edition the boats have been getting faster and the rules stricter. The tragic deaths that occurred during the first race resulted in tougher security measures like mandatory security leashes on life vests.

Already in the third race a female skipper joined the race: The Brit Clare Francis and her crew came in on fifth place with the boat ADC
Accutrac. From the sixth race in 1989/90 and onwards, there has always been an all-female crew in the line- up—the beginning of this great tradition was marked by Tracy Edwards (UK) who joined the race with her 58-foot-slup Maiden.

After the New Zealander Peter Blake had won not only the race but also all legs of it in 1989/90, the race commitee introduced a class boat for all contenders in order to ensure equal opportunities. Already in the first race the quality of the contending boats turned out to be a decisive factor—Ramon Carlín would never have won if it wasn’t for his brand new boat ”Sayula II”.

When car manufacturer VOLVO got involved in sponsoring the race in the late nineties, not only the number of legs but also the media coverage of the race went up. A system of points was introduced to evaluate the performance and determine the winner of the race. By now every team contending at the Volvo Ocean Race has not just the regular crew of 8 sailor (for female teams 11 sailors) on board but also a multimedia manager to document the action and provide the public with updates from the race, which lasts roughly nine months. What used to be a 120+ days race has become much more demanding: The route of the race has increased along with the number of legs. Ramon Carlín crossed the finish line after 27,000 nautical miles but the latest regatta of 2014/15 counted nine legs: From Spain to Cape Town, Abu Dhabi, Auckland, Newport (USA) and Lisbon all the way to Gothenburg, Sweden, the race spanned the globe in 37,000 nautical miles. Come fall 2017 the game is afoot again, when the world’s sailing elite sets sail for the 13th edition of the race in Alicante, Spain.

The race Ramon Carlín departed on that early September day in 1973 has gone through massive changes—just like the world it circumnavigates. What carried Carlín over the finish line of Portsmouth three months later was first and foremost his will to win and an able team of equally strong-willed individuals. But there is one thing the ”weekend sailor” Carlín didn’t succeed in: His son Enrique married his teenage sweetheart anyway after returning home from the journey. And he seems to have made the right choice. The couple is still married and enjoys regular family cruises on – you guessed it – the ”Sayula II”.

Ramon Carlín saw the film project THE WEEKEND SAILOR finished in 2016. He died in May of the same year aged 92.